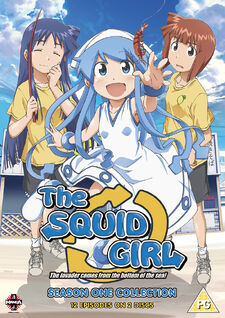 Squid Girl is a Japanese manga series by Masahiro Anbe, which was serialized in Akita Shoten's Weekly Shōnen Champion between July 2007 and February 2016. An anime television series adaptation by Diomedéa aired on TV Tokyo between October 4, 2010 and December 20, 2010. Media Blasters produced an English dub of the series, which was initially released on DVD between September 27, 2011 and December 6, 2011.

Following the expiration of Media Blasters' licensing of the series, Sentai Filmworks would then license and dub the second season.

Community content is available under CC-BY-SA unless otherwise noted.
Advertisement