Fate/Extra: Last Encore is an anime television series based on the Fate/Extra video game. It aired in Japan between January 28, 2018 and April 1, 2018, consisting of 10 episodes. The series began streaming on Netflix on June 30, 2018. 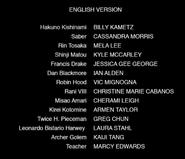 Episodes 11-13
Add a photo to this gallery
Retrieved from "https://animevoiceover.fandom.com/wiki/Fate/Extra:_Last_Encore?oldid=266666"
Community content is available under CC-BY-SA unless otherwise noted.