This is a manual of style for the format of editing to be used in the Anime Voice Over Wiki.

Please use authentic sources when adding titles. Do not reference sites such as Wikipedia as a source for a voice actor's role as they can have false information.

The following sources are considered authentic:

On rare occasions, voice actors may also be identified by voice, but this is not recommended as a voice may be misinterpreted, resulting in inaccurate information. 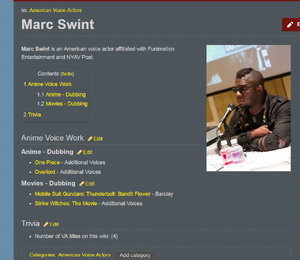 Output
Add a photo to this gallery

When creating pages for voice actors, follow this kind of structure. Ideally, there should be no spaces between headings and between text and bullet points.

When adding an image for the voice actor in question, the filename should contain his/her name only. 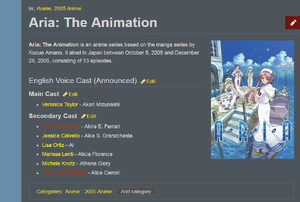 Structure
Add a photo to this gallery

As with the creation of voice actor pages, follow the above structure and use an appropriate image with the filename containing only the title.

When listing a voice cast:

If you have any questions, please contact any one of the administrators.

Retrieved from "https://animevoiceover.fandom.com/wiki/Anime_Voice-Over_Wiki:Editing_Manual?oldid=258118"
Community content is available under CC-BY-SA unless otherwise noted.